Armagh is labelled the Orchard County, the Cathedral City and the home of the spiritual capital of Ireland.

Mainly known as the ‘Orchard County’, owing to the rich apple growing area in the north of the county. Each May the countryside here comes alive with colour as the pink flowers of apple trees blanket much of the deep green landscape. In September as the apple harvest gets into full swing, the beating heart of Northern Ireland’s burgeoning food scene is ripe with authentic culinary experiences an annual Food & Cider Festival celebrates the start of this season. Rich in heritage Armagh is a fine specimen of Georgian elegance and one of its best known features is its Mall, once the city’s racecourse, lined by elegant houses and leafy trees. Armagh public library is the oldest in Ireland, dating from 1771 and has a first edition of Jonathan Swift’s ‘Gulliver’s Travels’, with notes by the author.

Well worth a visit is Navan Fort on the outskirts of the city. This Iron Age site was home to the High Kings of Ulster and was an ancient ceremonial site.

Immerse yourself in a unique experience which is quite simply ‘out of this world.’ Never before has the night sky looked –or sounded –as magnificent as when viewed at Northern Ireland’s only Planetarium. Experience our planet and beyond; touring the night sky, discovering some of the myths behind the star constellations and exploring black holes and cosmic chemistry.In a gastronomically-wealthy region renowned for its ‘Food Heartland’ provenance and quality –and recognised worldwide as the official Home of Saint Patrick –Armagh is steeped in history, heritage and culture. 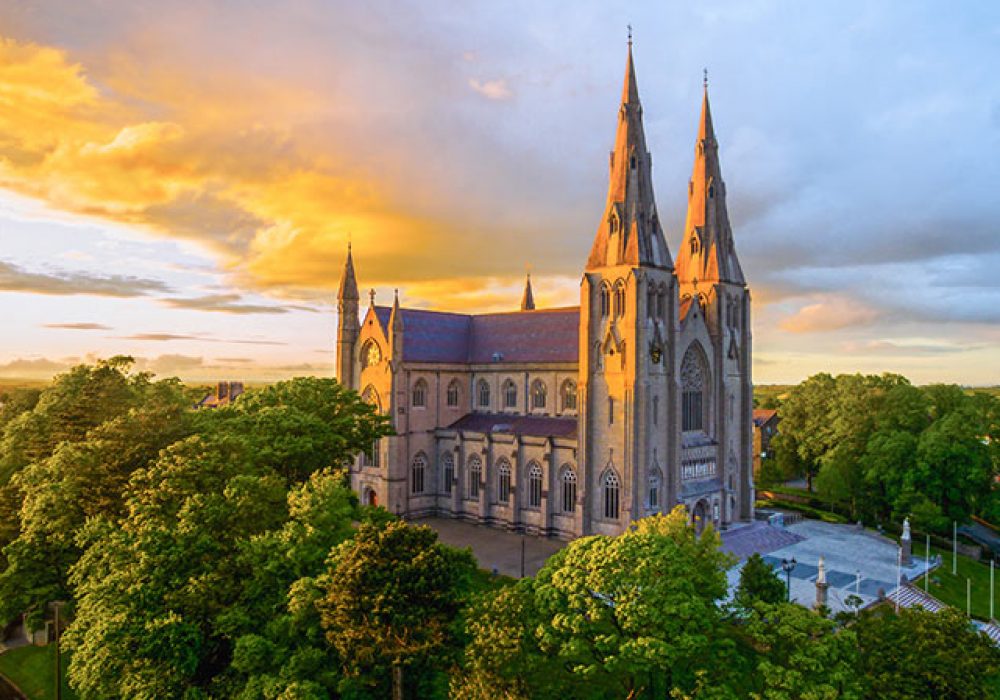 Armagh and apples have gone together for centuries. Probably long before the 12th century when orchards were first recorded here. Two ancient local townlands named Cannagola, ‘chief place of the apples’, give the game away. It is thoughtthat St Patrick himself planted an apple tree at Ceangoba.

It is also said that William of Orange quenched his thirst with the cider of the Orchard County, before his victory at the Battle of the Boyne. The King sent his cider maker, Paul le Harper, to Portadown with a handful of equipment to make sure his army wouldn’t go without their favoured tipple.

The Bramley Apple, for which Armagh is famous, did not arrive in the area until 1884 when Mr Nicholson of Cranagill, bought sixty Bramley seedlings from Henry Merryweather and introduced them to County Armagh.

Since the turn of the 21st century, County Armagh has seen a revival of it cider traditions, with artisan cider makers returning to the art of handcrafting cider. 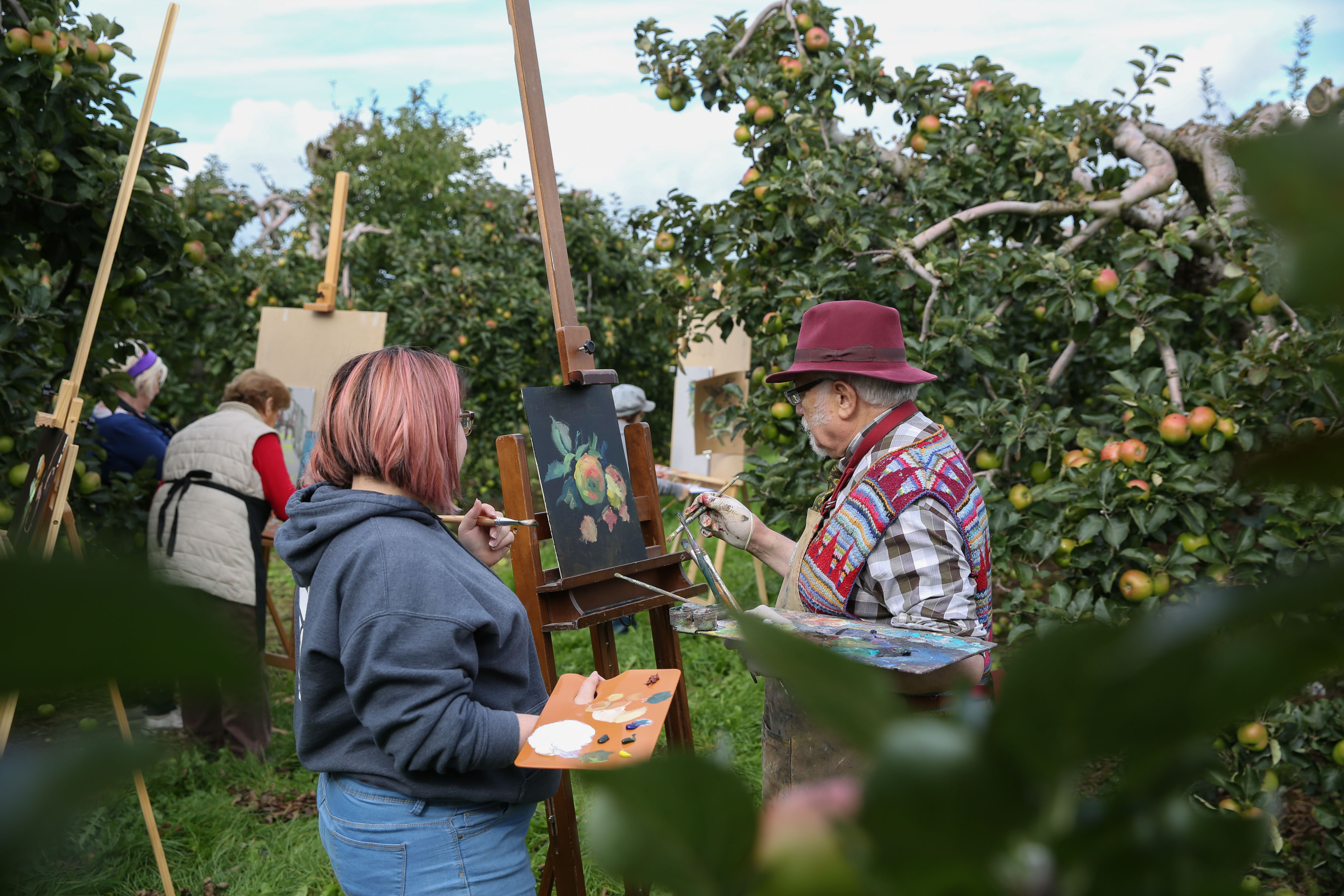 How many Armaghs are you ready to experience? You can trace the unfolding of Armagh over 7,500 years. From ancient Ireland to an unmatched Georgian heritage, present-day, modern Armagh is built against a rich background of history, as fascinating as it is complex.

Connect and feelthe passion of past generations in our historic buildings. Listen and hear the echo of ancient footsteps on our unique landscapes and orchards. Visionaries, explorers, innovators and creative talents have all left their imprint on Armagh, carving out legendary experiences and leaving a legacy of world-renowned products such as PGI (Protected Geographical Indication) awarded Bramley Apple.

The EU award of PGI status is a stamp of approval and credibility, and testament to the quality of the Armagh Bramley apple.

From its 6,000 acres of apple trees, the Orchard county is making dry and sweet varieties of cider that deserve attention.

THE BEAUTIFUL ROLLING hills surrounding the city of Armagh come alive with apple blossoms in the month of May. TheOrchard County has some 6,000 acres of apple trees, largely made up of Bramley, the great cooking apple recently given EC protected status, although other traditional varieties, with wonderful names –Bloody Butcher, Coccagee, Vicar of Brighton, Widows Whelps, Strawberry Cheeks, and Angel Bites –are attracting interest too. Drive from Portadown southwest through the pretty villages of Loughgall and Richhill and you will see little else but orchards.

There has been a revival of interest in artisan ciders in recent years, and there are now a number of small producers making genuine Armagh cider from freshly-pressed apples grown within the County. They produce very different styles of cider, but all are committed to putting Armagh cider back on the map.

The elements of this tour will vary seasonally. Visitors to the farm will experience all aspects of work on the farm e.g. pruning, factory tour with change to make juice in the baby applepress, grading apple as, taste and blend cider, bottling, even getting to name your own bottle of cider to take home.

Enjoy a traditional orchard workers lunch of Irish breads, tarts/crumble.See other aspects of this diverse farm with a chance to feed, brush and tend to the rare bread horses, who are lovers of our delicious apples. Make a ‘rosette’ to remember your visit to this very special County Armagh orchard.

There is also an opportunity for evening orchard banquet with live music.

Armagh Food and Cider Festival promotes the best of Armagh cuisine combined with the delicious local apple juices and award-winning Ciders. The Festival features a blend of bespoke, site-specific Orchard events combined with taste experiences and lively city centre events all with the PGI Armagh Bramley Apple at their heart. The events are small scale, and intimate to enable the visitor to savour both the atmosphere and the amazing food.